Hive is a community app for food lovers and seekers.

​​It was me, Kaushal Bhardwaj, & Lovish Jain getting into android development and in parallel trying to solve a problem that affected all of our fellow college mates.

​​The app was made to help us decide if going to the college mess for the next meal was worth it or not, on cost of those who went anyway and rated✌️

Initially the app (Foodbuzz) was just a digital mess_menu.pdf with rating feature, but in later iterations discovery and social sharing were added as to answer, If not mess then where? and Where is she hanging out these days?

Our audience were us college folks, the Generation Z.

​​I created few open-ended interview questions to get to know my audience's motivations and goals.

​​I interviewed three individuals in total. These individuals were all tech-savvy mobile app users who enjoy food and going out to eat. You can find the recording here.

​​I also surveyed 21 people for their outgoing habits. The majority was 18–24, frequent social media users. 92% of them go out to eat at least once per week. As them being students, these individuals were somewhat concerned with the price (most of them rated their concern a 6 out of 7). This lined up with my interviewees, who said they try to eat cheap unless it was for a

​​special occasion. I also learned that tracking and making lists of places they’ve been/ wanted to go wasn’t as important as I thought it would be.

​​We learned these fundamental things about the users:

​​1. People only care about the next meal.

​​2. People trust recommendation from known people. Reviews and ratings helps them in their decision.

​​4. Food is taste and in the digital world, it's all about photos as we can't smell and eat from our phones (right?)

Hive branding is done such that it’s infinite but also minimal, it’s structural and reliable but also creative and ever-changing.

Imagine a pattern of hexagons as in a bee-hive where each hexagon has its own unique gradient which changes dynamically.

​​I tried to integrate the features of the brand into the app through gradient colors, hexagonal buttons, and motion.

The 3 main features of this app are present as the bottom navigation; swiping left or right switches to the next meal or discover food features respectively. This bottom navigation is present throughout the app at every hierarchy. 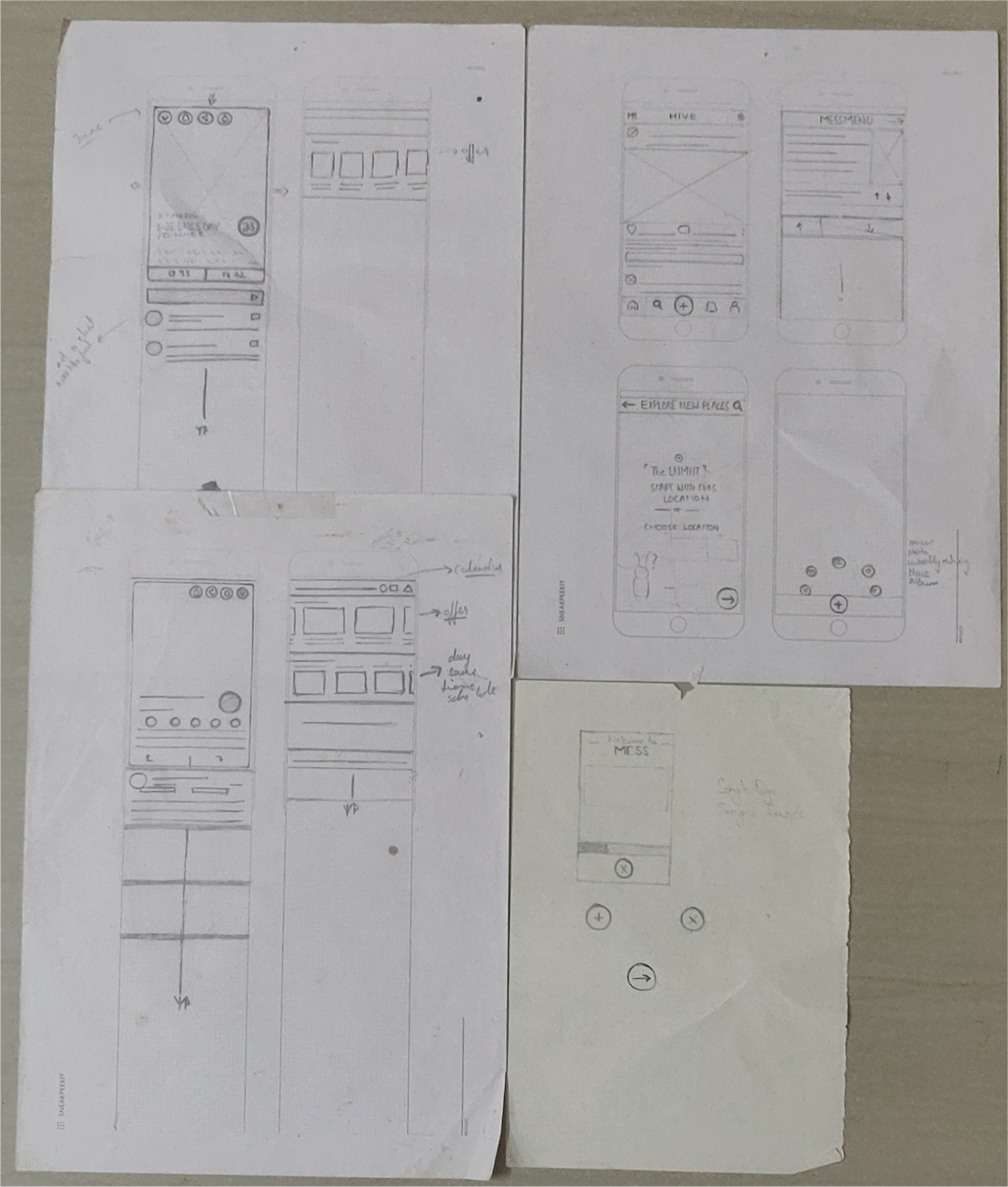 The legacy feature from Foodbuzz is redesigned, now it shows the next menu only.

​​A study found that 78% of participants trust recommendations from other consumers. So we implemented this special-rating, which only considers the ratings from user’s social circle as to reduces the cognitive efforts and provide an extra reliable context for the user. The circular elements of the rating communicate the same idea.

Discovery feature lets you decide where and what to eat which is fairly easy to choose. The first screen allows you to choose and select different food articles from different categories, you can either search one of the food articles or search all of them together by clicking the location.

This follow up screen shows the result of the search through a map with location markers. Filters such as price, rating, time and show bookmarks improve the efficiency and accuracy of the search.

We tried to develop habit-forming behaviour through the use of social feed which also increases user engagement and retention rates.

Hive's feed is similar to Instagram but just for food; a dedicated social sharing platform for food photography.

The restaurant profile screen is designed to reduce, organise, and prioritise the amount of information.

The actions like show menu, navigate, call are present on the card with the rating and other general information.

On top of the card, users can view the restaurant-related photos, and at the bottom, the reviews. Reviews provide rich information to their readers and are likely to provide them with a tacit feel, beyond the numeric ratings.

The two most accessible types of sorts – most helpful and most recent, play a significant role in organising the reviews.

We tried pitching Hive as a food delivery service to investors and this was the case study made for that opportunity.

It didn't work out but the work I did while analyzing the opportunity, reading the competition and building prototype is well documented and a nice read.